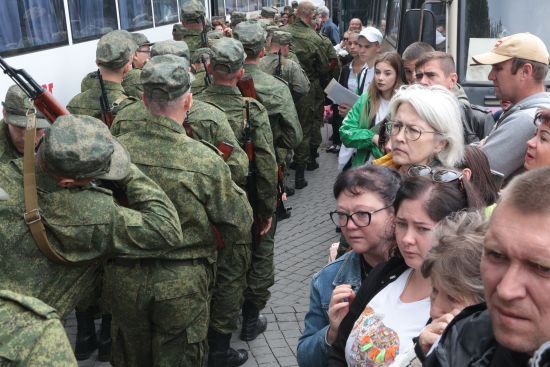 The Prosecutor’s Office of the Republic of Crimea advises residents of the occupied peninsula in the event of being drafted into the Russian army to notify the agency and not to commit crimes against Ukraine.

Mobilization of residents Crimea to war against Ukraine is a war crime.

This was reported by the Prosecutor’s Office of the Republic of Crimea and the city of Sevastopol, as well as its head Ihor Ponochevny.

Thus, he noted that since 2015, the Russian authorities have been illegally forcing Crimeans to serve in its armed forces. Thus, at least 34,000 people joined the Russian army. Ponochevny emphasized that from September 21, 2022, “Crimeans will be forced to die for the ideas of the “Russian peace” in the war against their own citizens.”

According to the Geneva Convention, an occupying power is prohibited from forcing civilians from the occupied territory to serve in its armed forces. However, the occupation authorities in Crimea conduct illegal mobilization. Summonses to the inhabitants of the peninsula are distributed throughout the territoryespecially in places where Crimean Tatars mostly live.

“Currently, it is possible to leave the territory of the peninsula only with the permission of the military commissariat, which, of course, does not give such permission. In fact, Crimeans are faced with a choice: death in war or 10 years in a Russian prison. In this regard, the prosecutor’s office of the autonomy has started criminal proceedings for the violation laws and customs of war (Article 438 of the Criminal Code of Ukraine). The sanction of the article provides up to 12 years of imprisonment,” informed the head of the Prosecutor’s Office of the Republic of Crimea.

The department also recommends residents of the peninsula whenever possible to leave the territory of Crimea in any way, to avoid receiving summonses and going to military commissariats.

“If, after all, you were forcibly mobilized, sabotage orders Russian military, do not take actions that could result in civilian casualties or destruction of civilian infrastructure. After all, in this case, you will be responsible for your actions as a war criminal, even if you were mobilized forcibly. At the very least, surrender To the Armed Forces of Ukraine,” the prosecutor’s office urged.

ARC functions to communicate with the prosecutor’s office “hotline” + 38 (096) 700 1600 (Telegram, Viber, Whatsapp and Signal). Information can also be sent to e-mails park.zvern@gmail.com and appeal@ark.gp.gov.ua.

Such information, the prosecutor’s office explained, will be confirmation that the person is not a “volunteer” from Crimea who decided to take part in a “special military operation.”

“If you voluntarily join the Armed Forces of the Russian Federation and take part in the war against Ukraine, your actions will be qualified as a crime against the foundations of national security,” warned the Prosecutor’s Office of the Autonomous Republic of Crimea.

We will remind you, the Russians in Crimea, the occupiers have already mobilized about 60,000 men into their army.