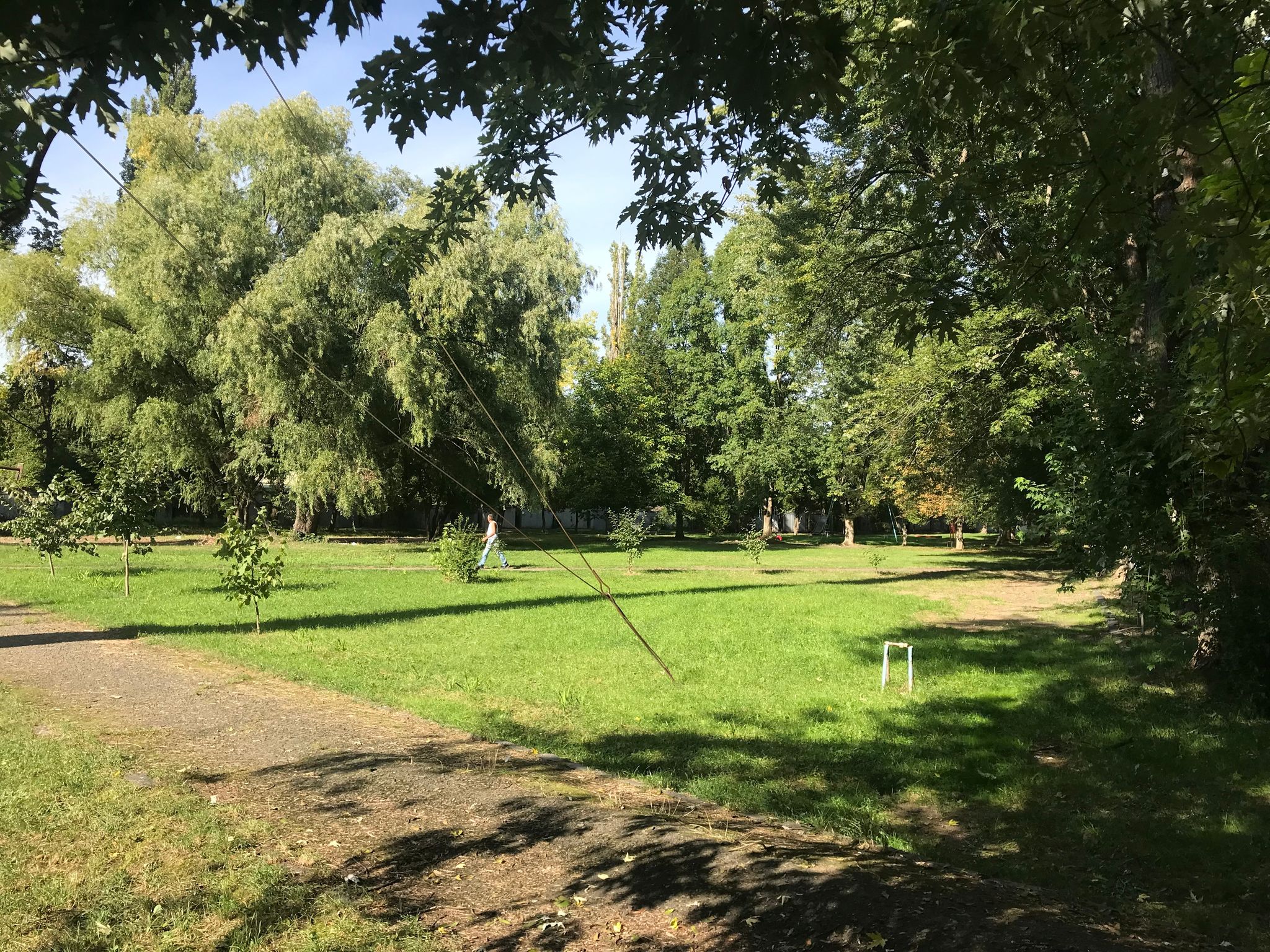 
There was a yard, once with sports grounds, currently quite neglected and attractive to all kinds of unsettled citizens. There was a boiler room in the yard, like many other places in the city. This boiler room, like many other places in the city, was quietly infiltrated by the organization “Boxing Federation of Zakarpattia Oblast”, which first rented the boiler room, and later, on the basis of “integral improvements” in the form of plastic windows and bricks, bought the boiler room from private property allegedly for the construction of a sports hall. Then – more: the public organization, which, in words, prepares athletes, appealed to the city deputies with a request to give them permission to register a land management project for the purpose “for the construction and maintenance of a multi-apartment residential building with objects of entertainment and market infrastructure…”. 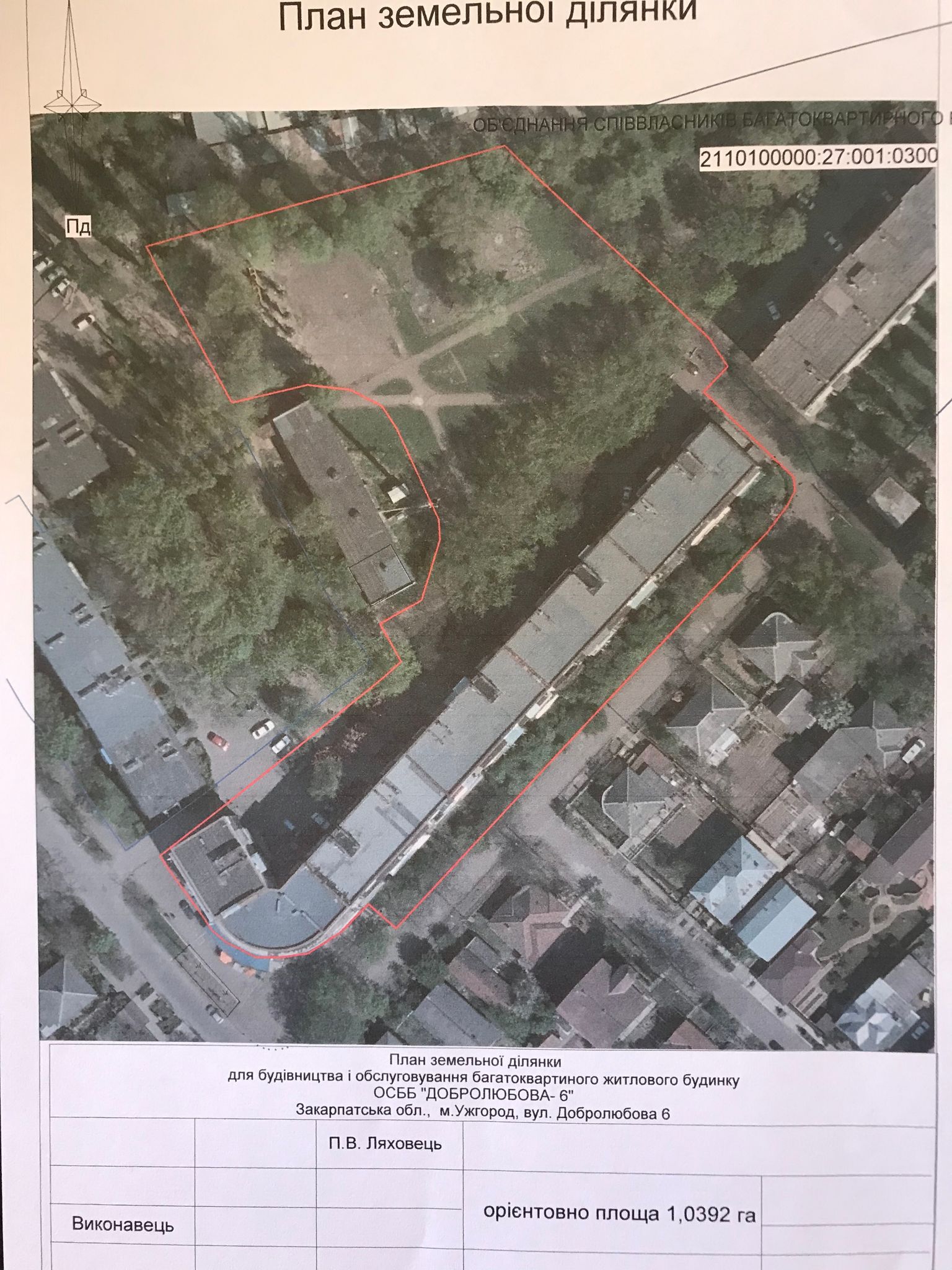 Of course, to the people living around the yard, the new neighborhood in this form looks completely undesirable for two reasons: why some incomprehensible organizations are suddenly given ownership of land inside the common lands of the city community, and why they agree to such a purpose, which obviously means, that a high-rise building will grow in the middle of the yard, and the process of its construction will create a lot of discomfort and negative impact on people’s health in the form of noise, dust, the impossibility of walking in the yard, and so on. In addition, it is not clear whether it is even possible to build a high-rise building on a swamp covered with slag and construction debris and whether it will not lead to the destruction of the surrounding houses.


By the way, the search for information about “FBZO” does not yield anything useful, except for information about the founding data, no athletes, no champions, no activity of the organization and its leader was found in the public information space. On the other hand, the organization, whose beneficiaries include a number of “resonant” personalities, has a distinct public criminal trail – for example Mykhailo Danylo was detained on charges of organizing an attempted murder Andrii Ivankiv, head of the Department of Economic Protection in the Transcarpathian Region of the Department of Economic Protection of the National Police of Ukraine, a Andriy StryzhakAccording to Office of the Prosecutor General and mass mediawas arrested as the organizer of a scheme to trade stolen cars in the EU.


Screen about the organization below: 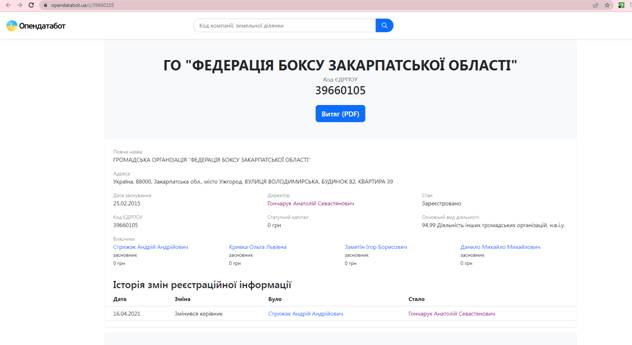 Currently, there is only one protocol of the Land Commission on the website of the Uzhgorod City Council, where the applicant “FBZO” appears – a screenshot of the protocol No. 66 dated 07.20.2022, this organization was given 0.4785 hectares in our yard for the construction and maintenance of an apartment building…”

Just in case, there is another organization with a similar name, please don’t get confused: Boxing Federation in Zakarpattia Oblast: 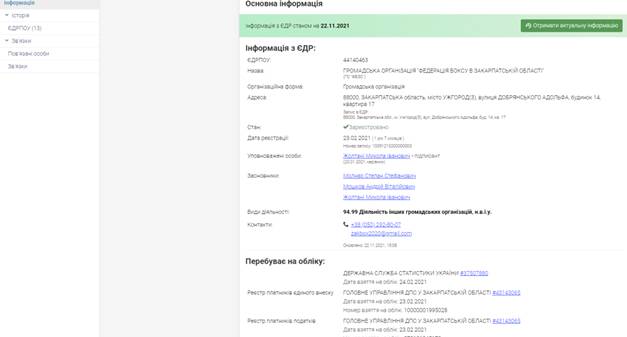 Step 2: micro-scandal and dancing with tambourines


Thanks to rumors and people about the intentions of “FBZO” with Stryzhak as its founder, the residents of the houses around the yard where the boiler house stands wrote eight appeals to the head of the military administration of the region Victor Mykyta and the mayor Bohdan Andriyev. The result of the appeals was a sharp surge in the activity of the mayor, who personally visited the yard twice and met with people who live in the houses directly bordering the yard. First, the mayor came to the yard with his colleagues, then he met with the active residents and the representative of “FBZO” in the city council, after that the residents went to the land commission, where they explained their position, to which the members of the commission amicably assured that they would support the position of the residents of the building ( OSBB Dobrolyubova 6), and will not support anyone, in short, a session of simultaneous clowning, aimed at calming people down. The next day, the mayor, representatives of the asset, specialists of the city executive committee and other participants gathered once again in the yard, where they looked together at the “old” boundaries of the area around the boiler house and agreed that the “FBZO” area would be granted within these limits. Allegedly, everything is fine, the land manager changed the boundaries, the changes were submitted for consideration by the land commission, we are waiting for the commission. The next land commission (14.09) did not take place, the next (21.09) commission did take place, the asset that came to the commission was “asked” to wait in the corridor so that, attention “not to create a mess”. “One person” was “allowed” to enter the commission, but two representatives of the condominium came in, even though the commission’s meetings should be held with unimpeded access of city residents.


At the commission, we were told that our issue has already been resolved, at the same time, supposedly as we requested. When we asked to show what exactly was decided, it turned out that the issue was “solved” within limits that did not suit us at all and that did not correspond to the agreement reached in the court.


Lyrical digression about the land commission:


Head of Commission – Mylo Volodymyr Volodymyrovych; Servant of the people

The party of your city


Separately, I would like to note that the rights of “FBZO” were “defended” the most, in descending order of activity: Mr. Smirnov, Mr. Kovalskyi, Mr. Glagola and, of course, Mr. Mylo. Here is a little about the head of the land commission: 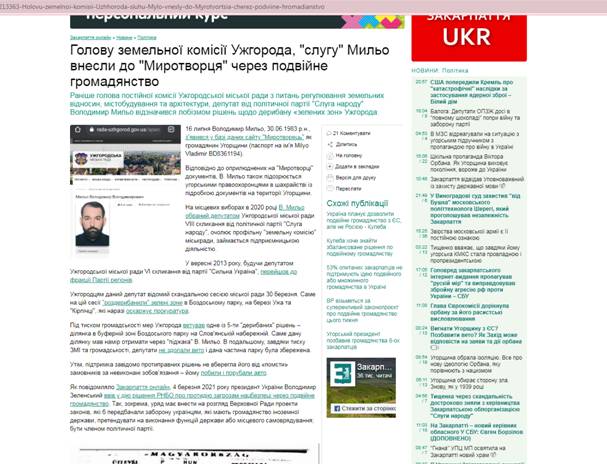 It is interesting that Mr. Kovalsky highly praised the achievements of “FBZO” in the training of athletes and champions, with which he probably wanted to prove that the organization deserves to receive a plot for the construction of an apartment building. I do not understand the connection: the public organization aims at sports development, training of athletes and sports achievements, what is the purpose of an apartment building, a normal person will ask. Also, Mr. Kovalsky tried to scare the representative of the condominium by saying that the commission meeting was being recorded, so now we at least know that the recording is being done, and to check the veracity of these words, we can ask to see the recording.


In general, the mentioned members of the commission do not behave very friendly with citizens who defend their interests, which also leads to certain conclusions about the purity of their deputies’ opinions.


Summary: the session in the first ten days of October will discuss the issue of allocation of land “FZBO” with an area of ​​0.19 hectares, which is unacceptable for the residents of the surrounding buildings, as well as for an unacceptable purpose.for the construction and maintenance of an apartment building with objects of entertainment and market infrastructure…”.


We don’t want the land we use to be taken away by someone unknown for what purpose.


There is Article 42 of the Civil Code, which says that the land in question here must be given to condominiums. Why then are the members of the Land Commission so stubbornly pushing the issue of “FBZO”?


1. Land plots on which multi-apartment buildings are located, as well as the buildings, structures and adjoining areas of state or communal property belonging to them, are provided for permanent use by enterprises, institutions and organizations that manage these buildings.